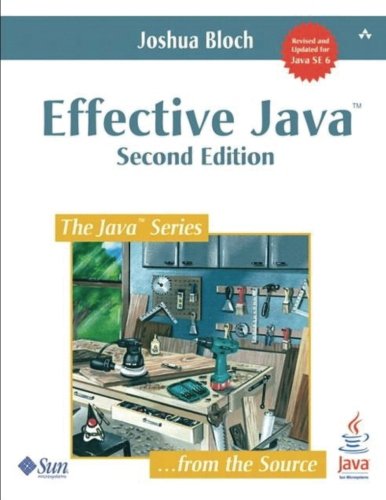 This book seems to be one of the most critically acclaimed Java titles. What could I possibly add to what has been said? The acclaim is fully deserved. I had the feeling that I already learned something new and important as soon as I reached page twenty. This is something that I cannot say of very many books. Effective Java manages to be extremely useful and simultaneously extremely easy to read.

However, “easy” doesn’t mean simple in this case, since many of the discussed problems are subtly complex. Some are so complex, in fact, that Java beginners might not fully understand or appreciate them. So, it’s probably not a book for beginners. On the other hand, the book is neither esoteric. The 78 items are general Java programming issues which one is likely to encounter in everyday work at some point, regardless of any specific domain.

The book is written in a clear and concise language and each problem is exceptionally well reasoned. The author has a very deep understanding of the Java language, which is rather apparent and no surprise, since Joshua Bloch is one of the architects of the Java platform. Incidentally, this also means that the problems are discussed from the perspective of an API designer rather than from the perspective of an application programmer.

This is useful, because it is primarily concerned with creating robust and high quality interfaces. Architects, designers, and application programmers benefit likewise from this. The items discussed in this book can probably be described as design and implementation level rationales. They are grouped by Java categories, such as generics, enums, annotations, exceptions, serialisation, as well as by more general concepts, such as object creation, classes and interfaces, methods and concurrency. Many of the individual topics are related; therefore the author makes ample use of cross references, which is helpful for reference use.

The included code examples are a joy to read; they are clear, concise, and always illustrative. While discussing the intricacies of the above named topics, Joshua Bloch casually introduces the reader to a good number of commonly used design patterns, many of which are illustrated with code examples. However, design patterns are not themselves formally discussed.

The book equips Java programmers with an arsenal of relevant best practices, from comparatively simple things such as creating objects, implementing “equals()” and “hashCode()” methods to more advanced topics, such as concurrency, mutability, and thread safety. In doing so, Joshua Bloch points out quite a few quirks and peculiarities of the Java language, and he does not only point them out, but explains their practical consequences in detail. Thus, the book has great didactic value, as the reader will end up with a higher level of familiarity with the language. Reading this book is time well invested for any Java programmer.